Zed Necrodopolis (born c. 2003) is the main protagonist in the Disney Channel original movie, Z-O-M-B-I-E-S, and Z-O-M-B-I-E-S 2. He's a member of the football team at Seabrook High. He is Zevon's son and Zoey's older brother.

Zed introduces himself and talks about life in Zombietown. He also introduces his father, Zevon, and his younger sister, Zoey. His big dream is to join the football team when he gets transferred to Seabrook High School and is optimistic that things are going to be better for the zombies at Seabrook High School. On the first day of school, he sees a beautiful human girl with blonde hair entering the school and he immediately falls in love with her. Once he enters Seabrook High School, he is disappointed that he and his fellow zombies are going to take classes in the basement. Even though Principal Lee told the zombies to stay there, Zed quietly sneaks out the door and heads to football tryouts. He accidentally bumps his foot into something, calling attention to himself. This frightens a student, who pulls a Z Alert and makes all the students run away. Zed tries to reassure them everything is okay but he ends up getting chased by a group of male students and takes shelter in a zombie safe room. He suddenly notices that someone else enters the safe room after him and hides behind a column of stacked boxes. To his surprise, it was the girl he saw earlier. The two begin a friendly conversation and tell each other about their goals for the school year. Zed introduces himself to the girl and learns her name: Addison. However, when the lights go on, Addison is horrified that Zed is a zombie and punches him in the face. Addison immediately apologizes and explains that her parent always taught that zombies are "disgusting dead-eye freaks", but says that Zed isn't hideous at all and he takes it. Their moment was cut off when cheer captain Bucky and his minions, Stacey, Lacey and Tracey, known as the ACEYS interrupt the moment and Bucky reveals to be Addison's cousin as he threatens Zed to stay away from her. He eventually makes it to football tryouts but doesn't make the team due to him being a zombie. He talks about what happened to him to Eliza, who gives negative feedback that football is stupid and that cheerleaders are monsters, indicating that she doesn't approve of Addison, when reveals that he has feelings for her.

Later that night, Zed hears a commotion outside and goes out to investigate, with his dad following behind, asking if things are alright. Zed is stunned to Addison and her new friend, Bree, hiding and holding a carton of eggs and is heartbroken. When his dad asks if anyone is there, Zed lies and says no one is there. He heads back inside the house, before giving Addison an upset look on his face, starting to believe that Eliza was right about cheerleaders, while making Addison and Bree see how zombies are being treated.

The next day while entering the basement, he talks to Bonzo about what happened and thought that Addison was different and was "The One" but states that cheerleaders are all terrible. When Zed hears the teacher mentions no human students in the basement, Zed turns around is surprised to see that the human in the doorway is Addison. The reason Addison came was to apologize for what happened last night and that her cousin is a jerk to zombies and she'll make sure that Bucky won't see them talking, restoring Zed's trust in her. Even though Eliza declines Addison's invitation to come to the pep rally later in the day, Zed states that they'll think about it.

Zed decides to accept Addison's invitation and he, along with his friends and a reluctant Eliza, attend the pep rally. Zed and the others, minus Eliza, are enjoying the pep rally until Bucky and the cheerleaders release the "spirit sticks", which are sparklers to get rid of the zombies due to them being afraid of fire. Bonzo, whose biggest fear is fire, starts to panic but Zed tries to assure him that things are alright and as a result, Bonzo pushes him and escapes through the bleachers, causing Zed's Z-Band to go unstable. Zed tries to stop Bonzo, who inadvertently scares the cheerleaders including the three who had launched Addison into the air for an aerial trick. Zed notices this, runs down the bleachers and knocks through the football team and catches Addison, impressing her and the football coach.

Zed is pulled aside for a private conversation with Coach and Principal Lee, thinking he's in trouble at first, but finds out that Coach wants to include him on the football team. Zed is elated about the news but only can do it if his people are fully intergrated. With Coach's support, Principal Lee decides to let zombies eat in the cafeteria and once Zed helps win more games, the other demands will be include and Zed agrees with the idea.

The next day, Zed and the other zombies are allowed to in the school's cafeteria for the very first time. He catches a glimpse of Addison, who is sitting with Bree and the other cheerleaders, who gives him a smile. He later calls her name and waves to her, which stuns everyone. Addison walks over and tries to welcome them in zombie tongue. Unfortunately, Zed has to correct with what she said which causes his other zombies to giggle at her, but he does thank her for welcoming them to the cafeteria. Before Addison can thank him for yesterday, the ACEY's drag her away.

Zed is mainly a rule-following student who tries to keep out of trouble. However, upon realizing that he has a chance to end the unfair treatment of his race, he jumps at the opportunity to fight for the zombie race. He is a kindhearted boy, seeing that being different isn't always bad, especially in his love interest, Addison. At one point, Zed jailbreaks his z-band with the help of Eliza so he's better at football. He also uses his jailbroken z-band to make himself look like a human in front of Addison's parents, who hate zombies, because they wouldn't let Addison continue to cheer unless they met the boy she sneaked out with. He can become jealous at times due to misunderstandings, when he thought that Wyatt had a romantic interest in Addison. He is also very protective, especially towards Addison and tries to do the right thing, even if it's not the right way.

As a zombie, Zed has a lot of special powers because of his zombie bloodline. Therefore, he is capable of the following abilities:

Someday- Ballad
(with Addison)
Add a photo to this gallery 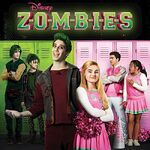 Gotta Find Where I Belong
(with Addison)

Someday (Reprise)
(with Addison)
Add a photo to this gallery

We Got This
(with Addison, Eliza, Bucky, Bree, Bonzo, Stacey, Lacey, Jacey and Zoey)

Like the Zombies Do
(with Eliza, Willa, Wyatt and Wynter)

One For All
(with Addison, Eliza, Bucky,Bree, Bonzo, Willa, Wyatt, Wynter, Stacey, Lacey and Jacey)
Add a photo to this gallery

Addison is Zed's love interest. He first sees Addison walking into Seabrook High with all the other humans, and he immediately falls in love with her. They first met in the zombies safe room in the dark. They begin a friendly conversation about their goals for the school year and introduce themselves each other. However, when the lights go on, Addison sees that Zed is a zombie, screams, and punches him in the face. She immediately apologizes, explains the way her parents taught to her about zombies and becomes smitten with him. However, their moment gets cut off when her cousin and cheerleading captain, Bucky, and the ACEYS enter and drag her away. During the cheer initiation, Bucky tells her and her new best friend, Bree to egg Zed's house, which she immediately declines to do. When Zed sees her with a carton of eggs, he becomes heartbroken, which makes Addison realize that the lives of the zombies are always being harassed and feels sympathy for them. She then throws the carton of eggs into the trash and goes back home with Bree. The next day, Addison follows the other zombies to the basement to apologize to Zed and sees this is where they're taking class, which she admits is awful. She apologizes to Zed about last night, tells him that she'll make sure that Bucky doesn't see them talking and invites him and the other zombies to the pep rally. At first believing Zed wouldn't come, Addison is happily surprised when Bree announces that zombies came to the pep rally and rushes to see that Zed is there as well. Everything at the pep rally is going smoothly until Bucky and a few other cheerleaders use sparklers to scare the zombies away cause one to get scared and run away scaring the cheer squad, especially three who had just tossed Addison into the air for an aerial trick. As she plummets, she ends up being saved, to her surprise, by Zed. The next day, she hears that zombies are now allowed to eat in the cafeteria and she smiles about the news. Zed calls out to Addison and waves to her, which shocks everyone. Zed is the first person outside of her family to see her real hair, which he thinks is beautiful. When Zed is taken away at the homecoming game, Addison becomes heartbroken and angry. She shouts angrily at the booing crowd saying that it was their fault that Zed transformed into a real zombie because they wouldn't accept him because he was different. She then removes her wig, revealing her natural white hair which stuns everyone. As a result, she gets booed by the crowd except for Bree, who smiles proudly and Zed, who smiles and stares dreamily at her. He loves Addison so much that he's willing to protect her.

Eliza is Zed's best friend. Despite their views on humans, they have each other's backs. She didn't approve of Zed's feelings for Addison.

Bonzo is another best friend of Zed's. He shares Zed's positive view on humans and is friendly towards Addison due to Zed having major feelings for her.

Zoey is Zed's younger sister and he is shown to have good relationship with her. He also acts like a dog in front of Zoey sometimes, possibly to keep her happy because of not having one, but later she got a pet dog from Addison.

Zevon is Zed's father and cares about his son. He believed Zed couldn't play football since the humans are against the zombies which is why he said that, he was proven wrong later on.

Check out the Zed image gallery.

Retrieved from "https://disneyzombies.fandom.com/wiki/Zed_Necrodopolis?oldid=5465"
Community content is available under CC-BY-SA unless otherwise noted.