Z-O-M-B-I-E-S
Z-O-M-B-I-E-S 2
Addison Wells (born c. 2003) is the secondary protagonist of Disney's Z-O-M-B-I-E-S and Z-O-M-B-I-E-S 2. She is now captain of the cheer squad at Seabrook High. She's the daughter of Missy, the current Mayor of Seabrook and Dale, the Chief of the Zombie Patrol.

Addison is first seen in her room, practicing cheering in front of a large mirror. She reveals that she has to hide her real hair under a blonde wig thus she has a hard time fitting into the community of Seabrook. Addison starts off her first day of school with a healthy breakfast. She is in her kitchen and eating a bowl of fruit and has a glass of water. Her parents are also in the kitchen talking about how excited they are about cheer tryouts. They are very supportive of her with sports. Her dad is the chief of the “Zombie Patrol” as he is seen with a pin that states that. Her mom is being re-elected for mayor, so it is very important that Addison makes the cheer squad. They tell that nothing will stop her as long as she keeps her wig on.

Once she arrives to Seabrook High, she is super excited about the school year. Her cousin and captain of the cheer squad, Bucky and his co-captains, Stacey, Lacey and Tracey, also know as the ACEYS, tell her that they can't let zombies change the way things are in town. Addison admits that they're just going to school like the humans which Bucky admonishes that zombies are nothing like humans and they tried to kill their grandfather, even though Addison admits that it was just a "small bite." There she meets another cheer hopeful, Bree and they bond over their love for cheer.

The Z-Alarm suddenly goes off as someone spotted a zombie in the halls, Addison tries to calm an anxious Bree down by showing her the Zombie Safe Room and that it'll be alright. Bree runs away screaming from her, due to Bree seeing one when Addison had her back turned. Addison decides to go into the room herself, only to find out that she's not alone, a boy is inside as well. The two of them begin a friendly conversation about their goals for the school year and the boy introduces himself as Zed. After Addison introduces herself, the lights turn on and is shocked to find out that Zed is a zombie. Horrified, Addison punches Zed in the face, only to find him in pain. Addison immediately apologizes explaining that her parents always taught her that zombies are dangerous but as she looks at Zed, she becomes mesmerized by how cute he is and tells him that he's not hideous at all and explains her family's hatred towards zombies as one bit her grandfather's ear off years prior. Their moment is interrupted as Bucky and the ACEYS barge into the room and Bucky reveals to Zed that Addison is his cousin and threatens him to stay away from her as he forces her out of the room.

At cheer tryouts, Addison succeeds in making the team and even convinces Bucky to add Bree on the team as a stand-in. Later that night, Bucky takes the cheer squad to Zombietown for the cheer initiation. Addison and Bree are among them and Addison becomes amazed on the neighborhood's creative skills. Her cousin give her a carton of eggs and tells her and Bree to egg one of the zombie's house to make them official. She and Bree refuse and Bucky and the others unintentionally ditch the duo when they get spooked by a zombie who tried to help them. Addison and Bree hide and the noise causes a zombie to see what's happening and Addison is stunned to find out the zombie house she was assigned to was Zed's house. Zed's father asks what going on and Zed replies that no one is there. He then gives Addison a disappointed look as he heads back inside. This cause Addison and Bree to see how zombies are being treated by humans and they both leave Zombietown, with Addison throwing the carton of eggs into the trash.

The next day, she confronts her cousin about his treatment towards zombies and that bullying them isn't right. Unfortunately, Bucky tells her not to question things. Shortly, Addison follows the zombies to the basement and sees that this is how they are attending school and admits that it's awful. She apologizes to a heartbroken Zed and reassures him that Bucky will not see them talking. Addison invites him and the other zombies to the pep rally later today, however one zombie sarcastically tells her zombies don't do pep rallies but Zed reassures Addison that they'll think about it and Addison leaves with a smile on her face.

Addison is a kind-hearted, nice cheerleader who falls in love with a zombie known as Zed while meeting in the zombie safe room. She doesn’t like getting bossed around by her cousin, Bucky. He eventually kicks her off the squad when she cheers for Zed in a public way and refuses to listen to him when he repeatedly tells her to stop. She is a natural born leader as she brings people together to do the right thing.

"Stand"
(with Bucky)
Add a photo to this gallery 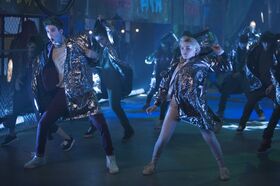 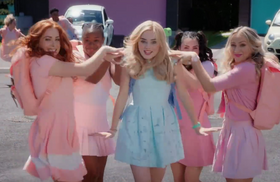 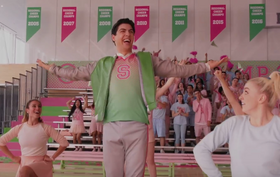 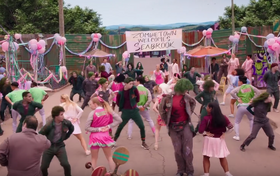 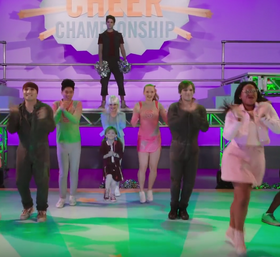 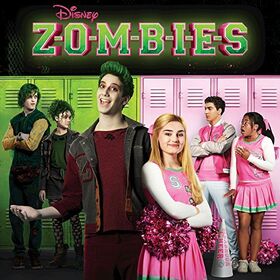 Gotta Find Where I Belong
(with Zed)

Someday (Reprise)
(with Zed)
Add a photo to this gallery

We Got This
(with Zed, Eliza, Bucky, Bree, Bonzo, Stacey, Lacey, Jacey and Zoey)

Call to the Wild
(with Willa and Wyatt)

One For All
(with Zed, Eliza, Bucky,Bree, Bonzo, Willa, Wyatt, Wynter, Stacey, Lacey and Jacey)
Add a photo to this gallery

Zed is Addison's love interest. They first met in the zombies safe room in the dark. They begin a friendly conversation about their goals for the school year and introduce themselves each other. However, when the lights go on, Addison sees that Zed is a zombie, screams, and punches him in the face. She immediately apologizes, explains the way her parents taught to her about zombies and becomes smitten with him. However, their moment gets cut off when her cousin and cheerleading captain, Bucky, and the ACEYS enter and drag her away. During the cheer initiation, Bucky tells her and her new best friend, Bree to egg Zed's house, which she immediately declines to do. When Zed sees her with a carton of eggs, he becomes heartbroken, which makes Addison realize that the lives of the zombies are always being harassed and feels sympathy for them. She then throws the carton of eggs into the trash and goes back home with Bree. The next day, Addison follows the other zombies to the basement to apologize to Zed and sees this is where they're taking class, which she admits is awful. She apologizes to Zed about last night, tells him that she'll make sure that Bucky doesn't see them talking and invites him and the other zombies to the pep rally. At first believing Zed wouldn't come, Addison is happily surprised when Bree announces that zombies came to the pep rally and rushes to see that Zed is there as well. Everything at the pep rally is going smoothly until Bucky and a few other cheerleaders use sparklers to scare the zombies away cause one to get scared and run away scaring the cheer squad, especially three who had just tossed Addison into the air for an aerial trick. As she plummets, she ends up being saved, to her surprise, by Zed. The next day, she hears that zombies are now allowed to eat in the cafeteria and she smiles about the news. When Zed calls her name, the other students are stunned and Addison, who doesn't want to be rude, gets out of her seat and walks up to the zombie table and welcomes Zed and the others to the cafeteria. Zed is the first person outside of her family to see her real hair, which he thinks is beautiful. When Zed is taken away at the homecoming game, Addison becomes heartbroken and angry. She shouts angrily at the booing crowd saying that it was their fault that Zed transformed into a real zombie because they wouldn't accept him because he was different. She then removes her wig, revealing her natural white hair which stuns everyone. As a result, she gets booed by the crowd except for Bree, who smiles proudly and Zed, who smiles and stares dreamily at her.

Bucky is Addison's cousin and the captain of the cheer squad. Bucky is the main culprit of influencing her decision making.

Bree is Addison's best friend. They met on the first day of school and bond over their love of cheer. Addison convinces Bucky to include Bree into the cheer squad as a stand in. She is the only human who doesn't have a problem about Addison's feelings for Zed, even though she doesn't want Addison to get hurt. When Bucky kicks Addison off the cheer squad because of her cheering for Zed and the zombies, Bree joins Addison's side and cheers with her and gets kicked off as well, even though she didn't care. When Addison revealed her real hair, she is the only human who doesn't boo at her, but smiles proudly her, indicating she likes her best friend's real hair.

Dale is Addison's over-protective father and the chief of the Zombie Patrol.

Missy is Addison's over-protective mother and the mayor of Seabrook.

Check out the Addison image gallery.

Retrieved from "https://disneyzombies.fandom.com/wiki/Addison_Wells?oldid=5405"
Community content is available under CC-BY-SA unless otherwise noted.